Many of the manufacturing and retail companies would like to compute their production unit costs using absorption costing techniques, where each cost centre is charged individually with its direct and indirect costs, which includes the organisation’s labour cost.

As you would know, labour cost reflects the time and effort which has gone into producing the manufactured unit or providing a service. For example, wages paid to employees working directly in the production of a product or service.

However, the dilemma faced by many employers is about, how to re-allocate some of the employer on-costs, like the payment towards employers National Insurance (NI), employers pension, and other employer payments, against the respective cost centres. In most payroll solutions, these are generally allocated to the home cost centres of the employees. This process is correct only when the employee permanently works under one cost centre, which is their home cost centre. It is a headache mainly for those Industries where the employees tend to take up different jobs under different cost centres and the re-allocation of on-costs becomes a problem. The finance departments normally end up doing the dirty job of manually reallocating the on-costs based upon certain predefined percentages made up of estimates and assumptions. Accounting journals are often created to reallocate the agreed proportion of the costs.

This article is intended to highlight the SAP functionality using payroll function XDEC, to achieve the re-allocation of on-costs automatically during a payroll run.

In an SAP standard solution, employer on-costs, are not automatically distributed to all the cost centres which have absorbed an amount of the employee time that is associated with the on-cost. However, during the early 2000’s, SAP introduced initial functionality to automate this process. A new payroll function was added for use in the UK payroll schema. The pilot implementation was done at Hampshire County Council and was mainly focused on public sector clients. Over the years, the XDEC functionality has been more widely used outside the public sector.

Payroll function XDEC uses weighted average cost basis to automatically calculate the appropriate proportion of on-costs for each cost centre. This may then be used to automatically post the accounting entries as part of the standard payroll posting process to the chart of accounts in finance. In the UK, the following on-costs are normally requested to be reallocated in payroll:

The following scenario will illustrate the cost reallocation using XDEC: 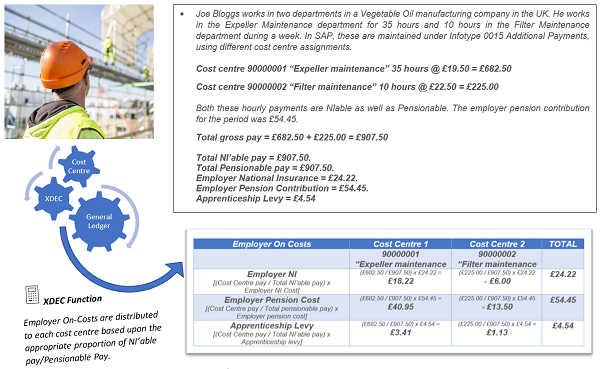 SAP carries out the on-cost reallocation to the different cost centres, automatically in payroll using XDEC function. It updates the COSTS table with the relevant cost reallocation information.

The following steps are to be completed to implement XDEC functionality in SAP.

XDEC is activated using the system table T77S0 switch, where group name is HRPSX and semantic abbreviation is XDEC. The default setting in SAP is that XDEC is inactive.

Base wage type grouping is a two-character identifier for a group of wage types to be used as the basis for distributing employer’s costs. 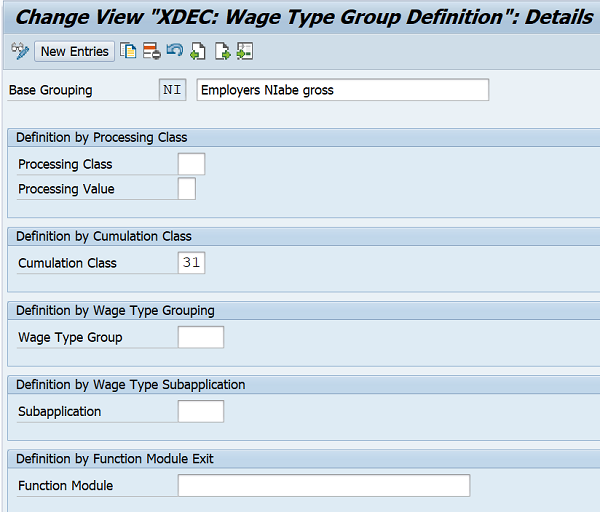 If these options are not enough for your needs, you could also use a function module exit. However, only one method can be used to define the grouping. This grouping can be used to split many different costs, but an individual cost cannot be split across many groupings. 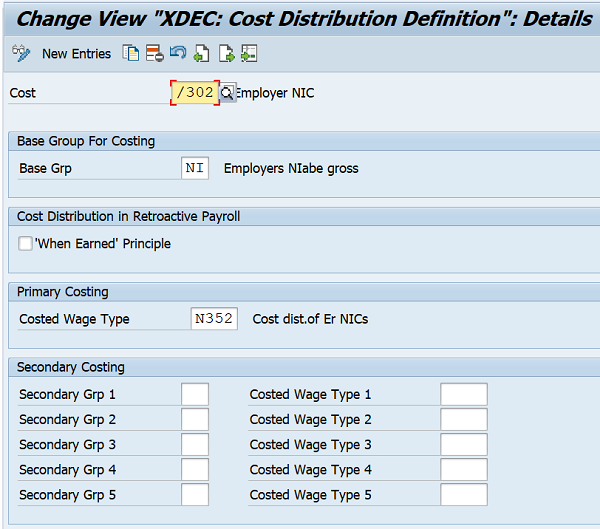 In the above example the source wage Type /302 Employers NIC is grouped based on the base wage type grouping ‘NI’, (which uses cumulation class 31) which in turn generate the target wage type N352. This cost wage type carries the reallocated cost values, along with the cost centre assignments, for posting into finance.

During the processing of payroll, each cost centre that has been posted to with NI’able pay is identified and given an indicator “C1 identifier”. In the example above, C1 identifiers 0001 and 0002 have been attributed to cost centres 90000001 and 90000002, respectively. These cost assignment indicators are then marked against the payments so that the correct proportions of total NI can be determined.

The XDEC function is not included in the payroll schema delivered as standard by SAP. Hence this function needs to be updated inside the customer version of the GEND schema (or the equivalent country version). The payroll function should only be called once at the end of the payroll schema, but just prior to the call to function GEXCP. No parameters are necessary for the function call.

When you adopt the XDEC cost solution, the old NI costing solution for UK payroll, must be removed from the payroll schema, to avoid NI being costed twice. In the case of single employments, the NI costing solution can be removed by taking out the PCR G302 as the second parameter wherever function GBNIC is called.

In the case of multiple employments, NI costing solution can be removed by first taking out the single employment solution as above and then removing COST (C1 & V0) as the second parameter (third and fourth parameters) wherever GBPSC is called.

Take the example of the ER NI Contributions, where the cost wage type N352 will carry the cost distribution generated by XDEC. You may need an additional wage type, say 935P (Offset employer NI which cancels the initial debit posting by wage type /302 to the home cost centre), to be added to correct the original posting for /302 (prior to cost distribution) which continues to be posted against the home cost centre. Wage type 935P will have a posting rule which is the same as that used for the cost centre posting for /302 but with the signage reversed.

The table below summarises the postings which take place for employer National Insurance with the introduction of the XDEC functionality.

As you can see, the costing wage type N352 which was generated by the XDEC function, carrying the cost centre details and the distributed costs against each cost centre.

Negative Payments causes XDEC to error for the employee unless such costs have been identified as such.

Negative entries can arise from salary sacrifice benefit schemes (Pensions, etc.) and/or from retrospective reduction in gross payments that are carried forward as negative entries into the current period. These are not true negative payments but are instead carried forward deductions in positive gross that do not have an equal or larger corresponding amount for the same wage type in the current period. They must be identified using the wage type grouping “NP” in base distribution grouping table T7PBSDEC_WTGRP. Such cost wage types are to be added to the definition of the wage type grouping ‘NP’. 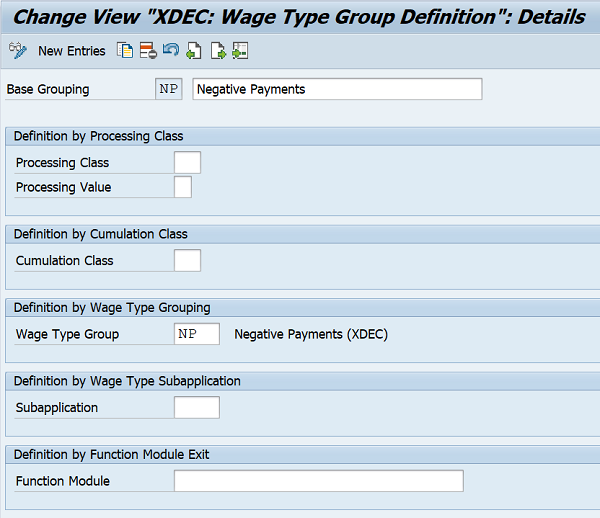 Before going live with the XDEC functionality, it is important to populate the COSTS table for the payroll history i.e., for payroll periods that could be re-processed by running a retro-active payroll. This is because, XDEC assumes that you have always used XDEC, as there is no activation date concept for XDEC. One would have expected that SAP used GBCHG feature with an activation switch!

However, this process is not necessary for clients going live on SAP for the first time as they will not have any payroll history that needs to be converted. To help the cutover process, SAP has provided a conversion program to populate the table COSTS. 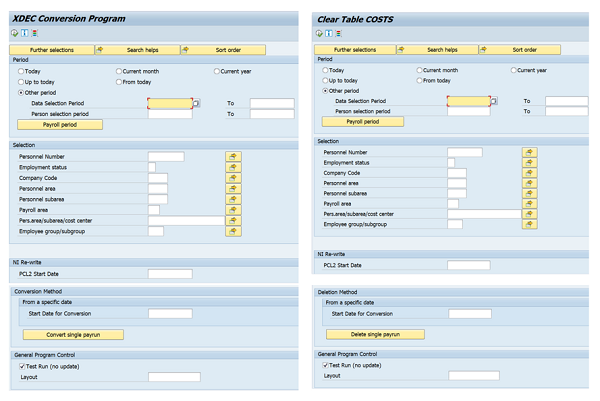 Figure 16: Conversion program for populating COSTS table, along with a program to Clear table.

The report RPUDECG0PBS_FILL_COSTS can be used to convert the COSTS table based on the payroll history.

A second program RPUDECG0PBS_CLEAR_COSTS can also be used to clear table COSTS, to aid testing.

SAP payroll users have been using other cost management tools like, infotype 0027 cost distribution and account assignment features within payroll infotypes. However, these are totally different to XDEC as they do not manage the distribution of employer on-costs. XDEC on the other hand processes the updates from IT0027/account assignments from infotypes, to reallocate the employer on-costs.

The cutover reports (RPUDECG0PBS_FILL_COSTS) may also needs updating, for usage in other countries.

Shanto Menachery is a Senior Cloud Consultant in SAP Payroll and SuccessFactors Applications at Zalaris UK & Ireland. He has more than 18 Years of consulting experience in SAP HR/Payroll/Time Management and SuccessFactors.